The fungal disease myrtle rust has been found in the upper North Island of New Zealand.

Since the first detection in a Kerikeri nursery last Friday, it has become more widespread.

It affects plants in the myrtle family, which includes some of New Zealand’s iconic species such as mānuka, pohutukawa, kanuka, as well as production plants including eucalypts and feijoa.

Apiculture NZ chief executive Karin Kos says while myrtle rust is of concern to the apiculture industry, there is not enough information yet on the likely impacts.

“It is not yet known how it will affect plants in New Zealand. MPI advises that overseas its impacts have varied widely from country to country and species to species.

“We do know that Australian beekeepers are still producing jelly bush honey (a leptospermum species) in areas affected by myrtle rust, but more information is needed and we are working with MPI and wider industry to gather that information.” Myrtle rust arrived in Australia in 2010.

MPI is appealing to local beekeepers to not move their beehives if possible. Beehives are wintered down at this time of year and so there is likely to be very little beehive movement.

MPI has urgent work underway to determine the scale of the incursion and has advised that this disease is notoriously difficult to control and so far there has never been a successful eradication of disease.

“We are in regular contact with the Government response team on this and will update members as more information comes to hand. In the meantime, if you think you have seen myrtle rust do not touch it or try to take a sample. Take a photo, including of the affected plant and contact MPI on 0800 80 99 66.” 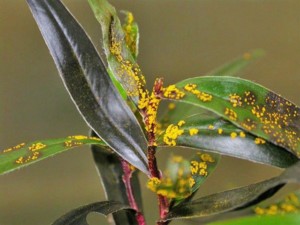 Myrtle rust on the leaves of an affected plant – MPI