The Conference hosted more than 1000 delegates from the apiculture industry at the Rotorua Energy Events Centre from Thursday 24 June to Saturday 26 June.  The National Honey Competition was one of the highlights of the event honouring producers across a range of honey categories and naming the top overall producer at a gala dinner on Saturday evening.

The runner-up was Rotorua-based, non-commercial beekeeper Kim Poynter who received three gold medals, one silver and a bronze.  In third place were Jody and Ralph Mitchell of Kaimai Range Honey from Tauranga who received one gold, two silvers and a bronze medal.

Head judge Maureen Conquer said that the judging panel had been extremely impressed with the quality and taste of the honeys entered.  “It was an absolute pleasure to sample these honeys over the past day and a half and extremely difficult to determine the winners. The number and quality of entries is continuing to increase each year, showing the true wealth of talent in our industry,” she told those present at the award ceremony. All entries were blind tasted, and an international scale of points was used to determine the winners across 12 main categories.

Apiculture New Zealand chief executive Karin Kos said the awards were highly contested amongst beekeepers and honey producers.  “Our industry knows that a medal in the ApiNZ National Honey Awards indicates the highest quality of honey.  We have so many beautiful honeys available in New Zealand, but the National Honey Award winners have produced something truly special.”

The Apiculture New Zealand Conference also was an opportunity to celebrate other successes within the industry with awards presented to those making outstanding achievements in apiculture science, innovation, sustainability and photography.  Dr Phil Lester of Victoria University of Wellington was awarded the Peter Molan trophy for his exceptional contribution to apiculture science, while New Zealand-based firm Ecrotek received the Roy Paterson Trophy for apicultural innovation for their plant-based, carbon-neutral bee frames.

Hantz Honey, from Leeston, South Canterbury received the Apiculture New Zealand Sustainability Award for their commitment to sustainability within their business and Hawke’s Bay beekeeper John Berry received the ‘Unsung Hero Award’ for his outstanding contribution to the industry.

The Supreme winner in the ApiNZ National Photography competition was Hazel Moran, a non-commercial beekeeper from Auckland, while the People’s Choice Award was given to Lindenberg Gomes for his bee-filled portrait.

Full results from the Apiculture New Zealand National Honey Competition can be found on the website at: https://apinz.org.nz/apinz-national-honey-competition-winners-2021/

Results of the other competitions are available here:  https://www.apicultureconference2021.co.nz/awards/ 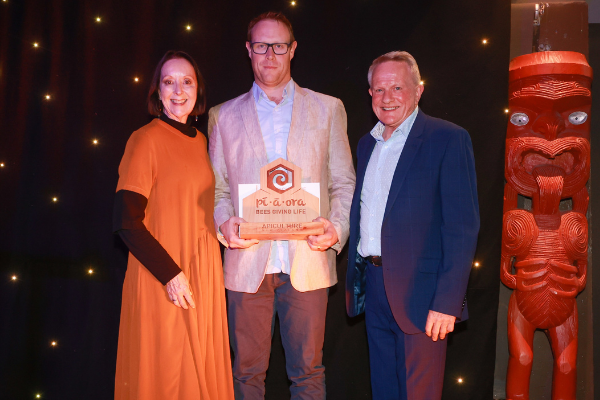