Apiculture New Zealand welcomes the decision by the Environmental Protection Authority (EPA) to release the parasitoid insect Pauesia nigrovaria as a biological control agent for the giant willow aphid.

“The giant willow aphid is a devastating exotic pest species that has negatively impacted the health of willow trees and by extension the health of bees and honey production in New Zealand since its discovery here in 2013,” says Barry Foster, Chair of the Apiculture New Zealand Science and Research Focus Group.

“Willows are a critical source of pollen and nectar for bees in the spring as they build up strength for the major honey flow and pollination duties.  Giant willow aphids reduce the vigour and strength of willows, in some cases leading to their deaths,” says Mr Foster.

The aphid also attracts large numbers of wasps in autumn which rob honey from hives and kill bees. Additionally, bees feed on the honeydew created by the aphids, which forms into unusable ‘cement honey’ that can’t be extracted or, in many cases, consumed by the bees due to the melezitose sugar it contains.

“Getting the green light to release the parasitoid is an important step in dealing to this nasty pest. Biological control was the only viable control option as chemical control methods are impracticable when considering the scale of willow planting in New Zealand. In addition, chemical control methods always have the potential to negatively affect bees and therefore honey production and crop pollination,” says Mr Foster.

The application to release the insect was led by Scion entomologist Stephanie Sopow who has been working with industry on this issue for nearly four years, with the support of several affected industries and government funding.

“We investigated a number of biological control options for the giant willow aphid and identified this parasitoid, which comes from California, as the most effective option,” says Ms Sopow.

Ms Sopow began testing the parasitoids in December 2017.  From an original import, she has reared 26 generations, adding up to more than 4500 individuals. Rigorous testing not only showed how effective the parasitoids are at killing giant willow aphids, they also showed that Pauesia nigrovaria will not be an issue for any other species, including native species, or New Zealand’s natural environment.

“We welcome the EPA’s decision to release the parasitoid and look forward to getting on to the next phase of work that will see it released in both the North Island and South Island early in the new year.  This has the potential to impact on giant willow aphid populations from autumn 2020,” Ms Sopow says. 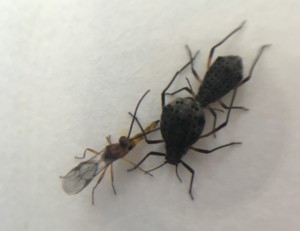 The parasitoid insect Pauesia nigrovaria (at left) with two of its prey, the giant willow aphid.