Rob and Lohnet Murray are the owner/operators of Tai Tokerau Honey in Northland.

How long have you been keeping bees?

Our company, Tai Tokerau Honey Ltd, has been incorporated since 2009, but Rob was working for a large commercial company for a few years before that. I am a registered primary school teacher but had to give that up in 2012 when our company became too large to manage after school.

How big is your operation?

We currently run approximately 5000 hives, we have our own extraction and packing plants, and employ about 20 people.

Can you tell me a bit more about the tikanga that guides your operations?

What does your commitment to sustainability mean for your day to day operations?

It means that everything we do is done with a long-term vision in mind. It is not just about the here and now.  We have to consider the long-term impacts and feasibility.

What do you find the most rewarding thing about being a beekeeper?

Working with nature, being out in the field is one of the biggest drawcards, and Rob enjoys being his own boss. But also knowing that our populations of native bees is very small, so by keeping bees we are contributing to the health of the ngahere as well.

What’s the most challenging thing?

Dealing with the uncertainty of the seasons and the increasing impact of climate change on our harvests.

What got you started in bees?

Rob Murray calls himself a jack-of-all-trades.  He left school at 13 and went shearing, beef farming, ventured into commercial fishing and was the first one to get an oyster lease in the Rangaunu Harbour.

One day, a cousin stopped in to ask if they could place hives on the home farm. When Rob mentioned it to his mother, she said no at first but eventually agreed to try it for a season to see “how that waka flowed.”

It almost didn’t flow as the company didn’t realise how hard it would be to move the hives over the wet farmland.  They wanted to pull out of the deal.  But Rob had other ideas.  He got an old tractor, put some steel wheels on it and moved the hives out there that night.  They’ve been there ever since!

When the beekeepers turned up they were impressed with his innovation and he was offered a job. This was the first time Rob had worked for someone else, but Rob thought it was the best job in the world!

After a few seasons, Rob started to get itchy feet, the kind of itch that can only be satisfied by once more being his own boss. He talked to me and we took the leap – Tai Tokerau Honey Ltd was born. 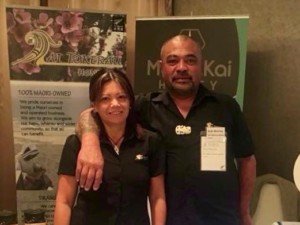